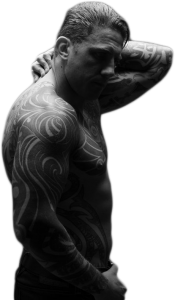 From humble beginnings in East London working in the family trade at London’s famous flower market Columbia Road, Greg knew that he wanted to do more with his life. The first to leave the family business, Greg decided to become a professional wrestler, paying for his training from his wages on the stall.

Starting training in 2001 and with his first pro match in 2002,  this quickly lead to matches around the world to live crowds in their thousands. With natural ability and an extraordinary charisma, Greg quickly became not only a fan favourite favourite, but regarded as one of the top professional wrestlers in Europe and arguably the top wrestler in his native United Kingdom.

Burridge would also prove to be a great teacher of the art of professional wrestling, running successful schools in the UK and Ireland, with esteemed alumni that are now top level international household names. He is currently head trainer and co-founder of the London school of Lucha libre.

It is this school, the LSLL, which provides the talent for the future of British action movies and stunt choreography, now being collectively called ‘The 265’. He is combining his masterful understanding of wrestling with fine acting skills and body mechanics to create a unique fight design system which can be more efficiently utilized in the movie making process.

Greg has been in such TV shows and movies such as Harry Potter and the Deathly Hallows, Ten Dead Men and The Royal Bodyguard working as a stunt-based actor.

Wanting more, Greg began training at the actors centre in London, his unique look, exceptional natural ability and presence started to gain him a strong reputation. He soon landed a role in the original run of the hit Tony award winning play Jerusalem at the Royal Court Theatre, where he tread the boards alongside Mark Rylance.

Greg has also landed lead roles in movies set for big releases. One being Welcome to Essex, alongside the controversially outspoken Russell Brand. Set for release in 2015, the movie that has set a record for the most live non-CGI zombies in a movie.

Seeing a gap for something new, Greg wanted to fuse the two worlds of wrestling and acting and develop a hybrid fight technique that can be used for filming. Greg developed the technique he has labelled “Grap-fu”. This technique soon landed him roles as fight director/actor/stunt consultant on movies Avengers: Age of Ultron, Figments, Trails of Blood and The Accelerator. It also took him into the world of advertising working for Vodafone on their German tv marketing campaign and Phileas Fogg crisps.

The latest and most ambitious project is the upcoming action film “London Rampage”, which Greg produced, wrote, fight-choreographed, directed and starred in. An audacious synthesis of a lifetime’s work, “London Rampage” brings a pure vision of Grap-Fu to the big screen alongside a compelling tale of life in modern London.

The visual landscape of his film, London Rampage, is one of stark black and white with hyper-real splashes of colour, highlighting the incredible backdrop of this brutally beautiful city in a way never before seen in British cinematography.

Whether wrestling around the world, appearing on the London Stage alongside acting royalty, on television, radio, or teaching a packed class of physical acting students 4 nights a week, Burridge manages to continue his vision in a character led dynamically cinematic, yet heartfelt way that allows you to empathise and believe he is the troubled everyman who can actually achieve the impossible!

I am a top level pro wrestler with 12 years experience. Through this I have my own pro wrestling/ stunt school based in east London . I studied acting at the actors centre in covent garden for two years. Through my skills as a pro wrestler and actor, I have manage to secure many action based roles and stunt work on movies and tv such as Harry potter,even on stage in the tony award winning play, Jerusalem . I am currently choreographing actors for a modern rendition of tanzi libre , a wrestling based play written in the 1970s . Currently I am fight director on a German/ Indian movie called figments, which i also play the character of the pathfinder. The movie is hoping to secure a international release. I am also involved in a zombie apocalypse movie set for release this year. I play the lead character , sgt jerry Ahern. I have also managed to find time and finances to produce my own movie which I am currently working on between projects. It is a action based movie using a hybrid form of on screen fighting i developed .theis Christmas , I appeared in the wilkinson sword advert as a angry elf who kidnaps Santa and threatens to she him. ( burridgeTV on you tube ).worked a stuntman on two movies set for release this winter, Dracula untold and reign of the general. I am currently training some of the stunt team wrestling fight choreography for a huge film franchise , set for release in 2015